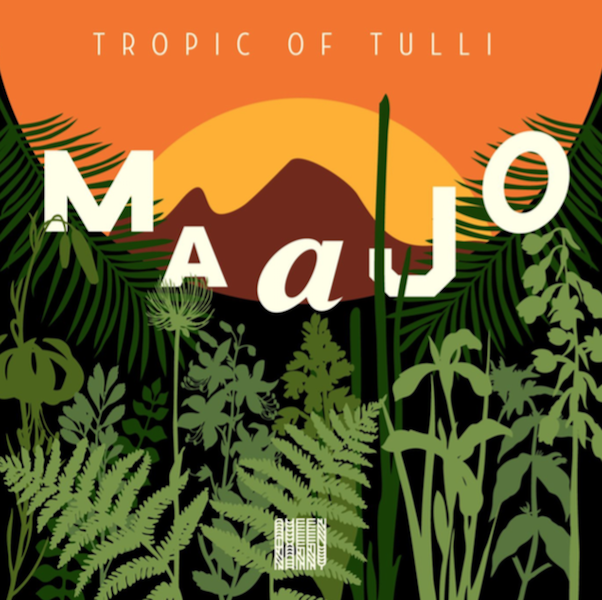 2017 was an incredibly exciting year for music of the breezier, analogue quality that you’ll find on 45turns. So, in no particular order, here’s a rundown of my top 10 long players (plus a guest appearance from a 2016 repress) released on vinyl last year.

A hand-vetted selection of lost and exciting funk, soul and disco gems from 1970s Japan. The whole package is a roller-coaster double LP starting with the inimitable Haruomi Hanso. Ride the golden tones of these exquisite Japanese recordings.

In 2017 Outro Tempo caused a stir amongst globally-minded music lovers, not least because it shook the perception of what ‘world’ music could be. Outro Tempo explores a period of intense creativity and innovation in Brazilian music, where analogue synthesizers and drum machines met with traditional instruments and oftentimes usurped them completely. These songs range from harsh and eerie to beautiful and ethereal, and are extremely deep. See 6am Ibiza moment ‘Kiuá’ for reference:

The second Brazilian input on this list comes from French-based Joâo Selva, whose debut LP Natureza recalls another golden age of Brazilian music. Superb crooner sensibilities and craftsmanship meet with energetic Bossa and MPB – in a heritage passed down from the likes of Marcos Valle – and fresh & spicy production courtesy of Bruno Patchworks. Lush and evocative, this is an essential release from an artist poised to make big moves in 2018.

The Côte D’Ivoire is a country whose musical output is often overshadowed by the likes of neighbouring Ghana and not-so-distant Nigeria. Oriki Music went some ways towards changing this last year when they brought out Akwaba Abidjan, a double LP collection of banging afro grooves from Côte D’Ivoire in the 70s. These recordings in their raucousness and imperfection offer up a glimpse of musicians experimenting candidly with new Western funky styles that is often lost in the overproduction of a Manu Dibango or Ali Farka Toure. More early Ebo Taylor than latter-day Fela Kuti, Akwaba Abidjan is a somewhat psychedelic romp through some of the enticing sounds of the Ivory Coast funky heritage. Check out ‘Secret Populaire’ at 13:16:

From grooving afrodisco to sweet analogue swept balearia, Crown Ruler Sound compiled by Spacetalk’s Jeremy Spellacey probably takes the cake for compilation of the year. Each and every tune is a certified killer and most are rare as rocking horse shit. 7″s of these songs you will not get, but Crown Ruler Sound you just might.

The final instalment of the highly respected Beach Diggin’ series slipped into 2017 at the last minute and nearly took the crown. I often wonder if there’ll be any music left to find once Guts & Mambo have completed their seemingly indefinite quest to travel the furthest-slung corners and sandiest beaches of the world for that sweet musical loot. Beach Diggin’ 5 was no exception to the consistently solid and starry-eyed selections we’ve come to expect from the series that always gets everyone excited. From Japanese jazz-funk soundscape ‘LA Nights’ To the incredibly moving closer, a blue latin jazz jam by Synchro Rhythmic Eclectic Language, Beach Diggin’ 5 delivered everything we’ve come to expect and more. Belter.

The coolest kids in New York came back and played some shows and made an album and all of it was a fantastic twisted variation on how everybody dreamt it would be. American Dream is the notable exception on this list in that it topped the US Billboard album charts. This says a lot about the group that made it: an album so steeped in ambient soundscapes and esoteric musical references and so foreign to the mainstream consumer can only top the American charts if everybody who knows even a little bit about good music turns around and says ‘I need to hear what this band brought out’. Maybe it was James Murphy’s master song-smith skills that did the trick. Or maybe LCD Soundsystem are one of those groups whose passion, ability and dedication to good music is strong enough to break down the walls in a musical climate failed by clickbait attention spans and synthetic cut-out dolls. American Dream is an album with a cover so bad you wouldn’t look twice at it if you keep your ‘favourite’ records on display because you’re part of the vinyl revolution, man. It’s an album that keeps the early 2000s New York effortless cool alive in the process of accidentally killing it off. It’s a killer and a dream that sounds like a 1980s nightmare, and I never thought it’d happen.

Disclaimer: Maajo first came out in October 2016, but I couldn’t grab hold of it until the reissue and it has, in lots of ways, embodied 2017 more than any other record.

Finnish group Maajo appeared out of nowhere and blew me away with their absolutely unique debut LP that gives West African stylings a huge dose of downtempo deepness and psychedelic, starry-eyed balearia. It’s like the Tony Allen and Andrew Weatherall collaboration that was so out there you didn’t even dream about it. There’s not much I can say about this record other than that it’s beautiful, immersive and cathartic, an epic tale of rainforest romance tinged with melancholy and told only through the medium of sound.

Australian-born Mike Katz dropped this record under his Harvey Sutherland moniker back in March, just as the weather got a bit nicer and spring started to bud. Expectations is an analogue nu-disco record not only in the equipment used (mmm, Rhodes), but in that Sutherland’s band Bermuda do all the drums, synth work and bass completely live. I saw them do it on a sunny day at Glastonbury. Expectations whirs and purrs it’s way through six earthy tunes that straddle funk, soul, jazz and nu-disco influences.

Rainy City Music is one of British dance music’s unsung heroes, as far as consistently different, home-grown labels go. Deepish house and Detroit influenced 12″s through the 90s and 00s have been as excellent as they have elusive- as it goes. In 2017, the label brought together eight unreleased tracks from the two decades of their existence for Forward: 20 Years Rainy City Music. From the hard sociopolitical assertions of opener ‘Detroit Is Black’ you’d never expect to find yourself in the mellow swing jazz terrain of ‘Butterfly’ that teeters on the type of UK broken beat popular in the 90s. The highlight, though, is the gorgeous closer ‘Lighter Shades of Blue’ – deep city diving at its finest.

As you might have noticed, the slight majority of the records on this best of 2017 list are from periods in the past; roughly, the late 1960s to the late 1980s. I’m inclined to argue that rather than painting a sorry picture of music in 2017, this fact represents something that we’re seeing more and more from the entire musical community. Young electronic producers are looking to the past not only for inspiration but for direct sampling – the sheer volume of 70s disco edits coming out on a monthly basis is testament to this. The so-called ‘vinyl revolution’ has facilitated a renewed interest in record shops and, by extension, the physical engagement of a younger crowd with a variety of rich musical heritages. At the same time, small and independent labels looking to snatch a share of the market from big-muscle companies churning out valueless reissues like dog food have looked to hidden corners and outermost precipices of the globe for ‘old’ new content. While the renewed surge of interest in vinyl might not be benefitting the people on the ground as much as it should do, it has by the same token prompted extraordinary feats of digging prowess and the presentation of a vast body of previously overlooked music to a growing vinyl crowd. With all this in mind, despite the lack of ‘new new’ releases on this list, we can see it as the endorsement of a different kind of musical discovery that, if anything, bodes nothing but good for the year to come. I’m definitely excited.