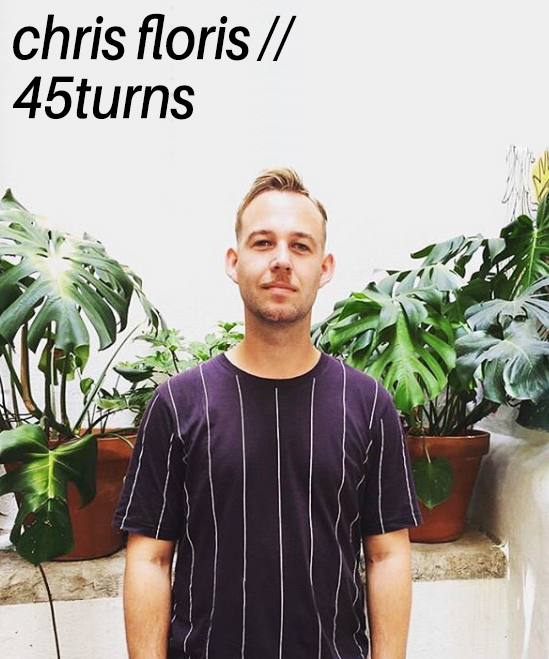 If your information stream has been any good for the past year or so you should be familiar with Chris Floris, an Amsterdam-based selector, curator and party lizard – and above all a close friend and collaborator – who has been letting loose with his penchant for good beats and good times in bars, clubs, warehouses and radios around Europe. Recent displays on Kiosk, Red Light, Netil and Operator complement mixes for eclectics, Birdcage and others, and Chris is in demand for his wide-ranging selections and performances that distil a myriad of influences and always raise the bar.

All this culminated in a weekly residency over the summer on the outdoor terrace of Amsterdam’s De School, where Chris showcases some of the closest of his musical inner circle until sunset. We’re grateful to him for inviting us down back in July, as well as this exclusive hour-long mix he’s provided that cuts through exotic balearica, percussive shuffles, big-room breaks and whacked out electronics. Hook up the soundsystem and let loose on an hour of distinctive CF bizzness, accompanied by some words on De School, his own COURS collective and what to expect from the future. Get to know!

You Friday sunset terrace sessions at De School have a super nice vibe. As well as the records, the space itself comes across as a hub for music heads and the wider artistic community in Amsterdam. What are the sessions about for you?

Thanks a lot Mikey. Yeah so the concept is simple but effective: every Friday I invite two deejays who I sense or know are sitting on a great collection of records, to share a taste of that with the sunny terrace of cafe DS. Setting: 2 comfy seats, a low wooden table, a mixer and 2 technics in battle stance for the deejays to orchestrate a non-club vinyl only trip from 17.00 til sunset.

While the energy of dance floors and crowds can be the dream and make uncomparable memories, I also find the freedom of a radio show or a listening session to be both interesting and rewarding. I truly love the calm environment of the terrace at De School and the weekly sessions for me are such a nice way to ease into the weekend. I would say De School in general can be regarded as a hub for creatives, attracts a wide array of crowds and has a strong overlap with what I aim to achieve with this concept and COURS in general.

Tell me a bit about yourself and your musical journey to this point.

I come from a hiphop background. I went from rap to baking beats back in the attic of my mum’s home for many years – which often drove her crazy (sorry mum 🙂 ) because well, to be fair she probably only heard the bass kick trembling through the ceiling for hours a day. Really loved (and still do) that soulful sample-based meets electronic breaky beats, listening a lot to the likes of j dilla, madlib and early kanye west productions as well, but also dutch kings like Hayzee and Delic. In my twenties I started exploring more and more styles and genres, and actually only started deejaying like four years back. Now, to do a bit of a fast-forward to the present: I enjoy the search – the collecting of music a lot. I have a soft spot for odd noices, out-of-the-box percussions and generally music with a certain edge to it. I try to reflect this in the sets I play, caring the most about selection and momentum without putting any restrictions to genres or labels. I’ve gotten a lot of freedom exploring that musical spectrum with the truly amazing crew of Operator radio in Rotterdam where I have a recurring show since more than a year now, but also being able to play at Red Light Radio or Brussels’ Kiosk Radio is always a pleasure. Some of my fav nights this year so far include closing down Skatecafe with brother Ali, several sessions with a close group of deejay friends at Radio Radio, oh yeah and recently I did this all nighter at an amazing intimate spot in Lisbon called Lounge. And surely, not to forget the rave we played in east london earlier this year with you guys and the entire elevator east crew in this secret warehouse location with balearic godfather Leo Mas. To add to that: I really love playing those undefined spots (is it a bar, is it a club…… or is it a cafeteria?) where things start off chill and innocent but can completely escalate later at night even though it’s not necessarily expected.

What is COURS about? Who else is involved?

Ha! I believe this might be the first time I share the origins of the name: I came up with it when I was in Marseille with my ex-girlfriend. You have many amazing squares in this city – for example Cours Julien – where after a hard day’s work all sorts of people get together to celebrate life and enjoy each others company, regardless their differences. I saw a lot of overlap and similarities in what I value and enjoy so much in underground music culture and in how I like to bring people together regardless, for example over some odd music get-together. COURS is all about that, and this weekly session at De School felt like a great fit instantly. I try to do the same thing on the grid: online I curate a selectors series of experimental music blends on the soundcloud page which are always complemented by artwork from local and international artists in my network. I still have a bit of hard time deciding what to call it. Even though I run it on my own, there’s so many people contributing with their music, art and support that I still like to call it a collective rather than a one man army haha.

Who have you had on the terrace so far?

I kicked things off with my friends from Filament. 3 great guys from Amsterdam with perhaps ever greater record collections, with whom I’ve been sharing line-ups a lot over the past year and it’s always a pleasure. The week after we had the talented red light affiliates KAT and Julia Mira who definitely set the bar for the rest of summer, followed up by a visit paid by yourself (sibson) and ikävä pii for the weekend. After taking a week of playing and enjoying Lisbon I invited Utrecht-based Stijn Sadée who gave us a taste of african field recordings and gamelan influenced stuff that matches his first release on Kitjen last year. He was joined by good friend and practically neighbor Jesse (Tender Justice) – at whom I also rec’d the attached mix. Next Friday was another great one with friends Hellie Berry and DJ Leoni that came over with a great blend of zouk, jazz and experimental electro, even though for example Leonie normally plays the rougher parts of EBM and techno. It has been an amazing ride so far with a mixture of good friends like Toine (Ask Me Later) and new collection I met through this concept such as Julius (Post Traumatic Drum Disorder) who just premiered through this fresh new Flippendisks label and Sara Berton and Camille Maria who brought the entire famiglia (the booth was surrounded by like 30 friends!) and we went on till far past sunset. Not to forget Daan (Dean High) who has been baking beats ever since high school from which I already knew him (I was like 16 then). And Dj Almelo (from Rotterdam hehe). To be honest I have been very happy with all the invites that came by and the sets they delivered on the terrace so far. The concept has brought me all of the things you mention above, I’ve seen dj’s I put together that did not know each other discovering a great chemistry in their music taste and selection. A fun addition is that you get to spend a lot of hours in a very relaxed setting together, there’s room for good talks, meeting friends and new interesting people that tag along.

Tell me about your plans for the rest of the summer. We just (and barely) survived a heatwave in the Netherlands, one of the only upsides to that is that it seems like I’ll be hanging out lots of more friday evening’s at De School, as we’ll continue the sessions as long as the weather will allow us. I’ve already confirmed most of the names for this summer. As for myself, I’m really looking forward to playing at Radio Radio again in a few weeks, which is one of my amsterdam fav spots and we’re now filling the night with only good deejay friends like Uprock’s jack dolo, german-sounding dutchies with a knack for slow EBM world stuff Tanzmaschine and my ODAM-buddy ali every 2 months. Other fun stuff includes playing Rotterdam-based Keilecafe amongst loads of friends there and hosting an event with ikävä pii, a new mindblowing electronic live duo named Java Dreams and Dazion on Friday evening in an ex-anatomical laboratorium in Amsterdam West. I’m also talking to some fav spots in town to set up some more dancing, nighttime rendezvous’ with COURS.

Pick a song for right now.

note: Dazion is one of my fav dutch producers and even though in all truth I enjoy basically every release he has done so far, with this new EP on Music From Memory’s sublabel Second Sircle – he has really outdone himself in my opinion. The song itself resembles a lot of stuff i like, both the edgy sound, squeaky noises and tribal percussion.

Thanks again to Chris for the interview and mix – you can follow his music and socials at sc, fb and insta @chris__floris, as well as the COURS soundcloud page where you can access their full mix archive.