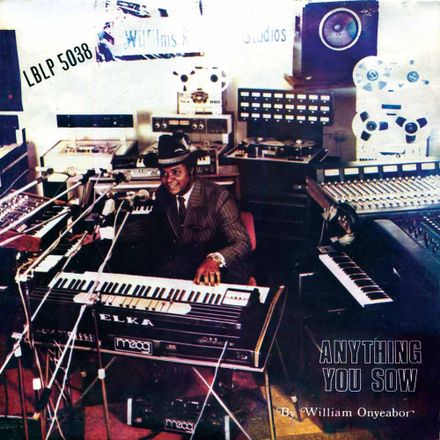 prePart 3 goes through songs 31-45 of our introduction to the music of West Africa, delving into the cosmic territories of Nigerian disco, Cameroonian funk and all-out dancing heat from the centre of the Earth. If you enjoyed this introduction, please let us know here or over on Facebook. You can find all of the tunes in a nice list for your streaming pleasure on Spotify / Youtube.

As globalisation encroached following the independence of West African countries throughout the 1960s, cutting edge hardware like synths and recording units – all the stuff we consider ‘vintage gear’ today – began to fall into the hands of West African musicians. By the early 80s, ‘Afrodisco’ was taking urban areas by storm. Lagos became a massive hub for disco and funk experimentation. On the flip side, social unrest and military occupation in Accra sent Ghanian disco musicians fleeing to neighbouring countries – mainly Nigeria – or further afield; this is why places like Amsterdam, Paris and Berlin have become hotspots for diggers looking for the rarest afrodisco cuts.
Afrodisco provided – and continues to provide – a musical touchstone and a treasure trove of samples for tons of house music in the US and elsewhere. Its proximity to funk, pop and 4/4 rhythms embedded in the musical fabric of a certain generation in the West also makes it a convenient entry point to West African music. Despite this, though, we’ve left it until the last section. A little bit like a celebration. Get yr disco shoes on.

One of the most recognised and revered afrodisco anthems. An incendiary 11 minute locked disco groove from Nigeria, with synthy overtones and funk elements. I say no more.

You know this one. Maybe you didn’t know that it came from Ghana. Peak time dancefloor heat!

What can you say about Steve Monite? Not much. Like William Onyeabor, Monite is a mysterious figure in the history of Nigerian music. There are a handful of tracks on his one and only LP, ‘Only You’, that blew my head off when I heard them. The eponymous track is the highlight – crackles, pops, strange asides, moans, masterful arrangement, heart-tugging hooks, and THAT bassline. Some say that Onyeabor and Steve Monite could be the same person. But here’s a level of soul that we struggle to find even in the deepest corners of the Nigerian cowboy’s back-catalogue. Steve, you are wonderful.

Massive in Nigeria in the 80s. Apparently you would hear this everywhere. Better than putting the radio on today?

Recorded in Lagos at the height of the city’s afro-disco craze, ‘African Soul Power’ is a slightly darker addition to this list. When it takes off from its techno-esque interlude, it veers into all of jazz, soul and haunting psychedelia. The tension between the dissonant guitars and odes to unity (‘making music for the people / disco music for the people’) creates an eerie restlessness that can only be shaken off in dance. Fela Kuti once said that the Basa Basa twins from Ghana had ‘magic powers’.

Fela Kuti and other afrobeat pioneers that we looked at in part 2 took massive cues from US funk artists like James Brown. While afrobeat came to be synonymous with the music of the region, though, there were far more straight-up funk bands operating in West Africa during the late 1970s and 1980s. Instead of the dense polyrhythmic percussion exemplified by Tony Allen, many bands took the basic straight disco beat as a bedrock for a host of syncopated guitars and synthesiser explorations. A lot of these bands are only now coming to be recognised by a new generation of DJs, musicians and African music enthusiasts from the rest of the world. Here’s our top picks.

Easing you in gently is well-known Nigerian songstress Christy Essien, preaching over the lush disco-funk vibes. That bass.

Straddling the line between disco & funk, the inimitable Steve Monite’s ‘Things Are Falling Apart’ is the second classic from his singular and single 1984 LP. Things Fall Apart was originally a novel by Nigerian writer Chinua Achebe, coming out on the eve of Nigerian independence in 1958. Achebe’s meditations on identity and decolonisation served to push the phrase ‘Things Fall Apart’ into a sort of common Nigerian ontology fit for the latter half of the 20th century.. Here, Steve gives us his own take on this perpetual state of difficulty. ‘What are we gonna do now?’ he laments. Maybe he couldn’t put out the fire.

André-Marie Tala might be considered Cameroon’s answer to Stevie Wonder. Blinded at the age of 15, ‘Tala AM’ went on to create probably the liveliest funk and disco music in Cameroon. Fact: James Brown’s ‘Hustle’ is a direct rip of Tala AM’s demo ‘Hot Koki’ that was given to him on a tour of Cameroon.

A mainstay of afrofunk, again from Cameroon. Great friends of Tala AM and Fela Kuti, Pasteur Lappe is an artist who is only just beginning to gain widespread recognition for his work in the 1980s.

The son of a Yoruba king, Joni Haastrup’s lively ‘Greetings’  lies somewhere at the intersection between afrobeat, disco and funk. His band featured Fela Kuti on trumpet at one point.

Highlife grooving with that slow-mo funk rhythm section. Soulful, breezy and gorgeous, ‘You Need Love’ shows the Ghanian guvnor Ebo Taylor at the height of his arrangement and performance skills.

Perhaps the mightiest drop in all of Nigerian Funk.

Neither disco nor funk, neither here nor there. A universal message. The potent words, jaunty, open-hat beat and mesmerising synthscapes forged here by southern Nigeria’s enigmatic studio guru William Onyeabor sent Lagos into a frenzy in the mid-80s. Just look at the gear. It’s rare to hear Onyeabor waxing so much lyrical content in one track, and his almighty-preacher delivery is simply intoxicating. The oscillator sounds in this (particularly the entire sequence from 5:48 in this video) did more with electronic synthesis than house and techno in Europe and America at the time, and they have been used a focal point for sampling and reimaginings since. Everyone from David Byrne to Daphni and Damon Albarn will sing the praise of this tune – hear it for yourself.
‘When they come back they have come back to help in knocking you down down down down down….’

That’s it for our introduction to the music of West Africa. There’s loads and loads more we could dig into, but a lowdown in 45 tracks should suffice – part of the fun is in exploring the deepest, dustiest crates and the vast expanses of the internet yourse,f. To recap:
Pt. 1, highlife, palmwine, Malian traditional pop and Afro-Latin
Pt. 2: afrobeat & psychedelia
The 45 tracks are also available to stream on YouTube and Spotify. You can also support 45turns by sharing this article and liking us on Facebook (click here or use the sidebar to the left).
Happy digging.