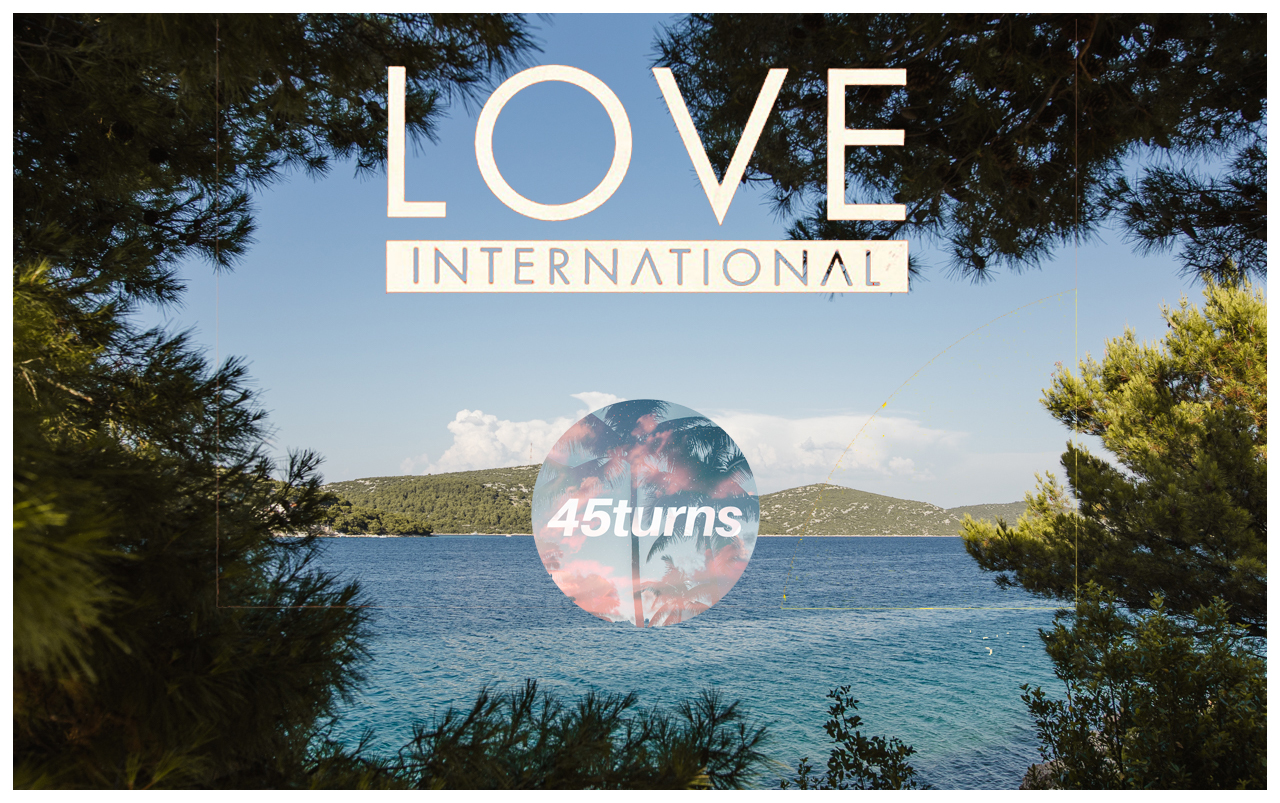 ‘If you just become love, then you will know the nature of love…’

Imagine you’re an intrepid sailor, floating around the salty waters of the Adriatic sea. You come across land, a natural bay edged with hills, deep with trees and rocks jutting out across the green. Then roofs appear, presupposing settlements, rose-tinted with white and windowed façades holding them up. Boats meander to and forth along the horizon, some of them packed to the brim with revellers, hands in the air in a life-affirmed reckless abandon. This is the Love International feeling: brilliant, beautiful and quite inexplicable. At the moment the last slivers of sunlight dip into the horizon and the faces of your new friends reflect, rippled, in the golden waters, you have to ask yourself: is this balearic, then?

This is the view of the sunset from the pier that juts out of The Garden, the Love International festival site, and behind it is three curated stages hosting some of the more special names in house, disco and balearic sounds every year for one whole week in July. At LI you don’t feel like an attendee. Observer becomes participant in the pursuit of celebration. From sunset to sunrise and back again, folks come together in a way that you no longer get in the increasingly stifling UK club scene, or the vapid mass congregations of inner city festivals. We arrived late on into the festival, 4 days in with 4 days left to go. You wouldn’t be able to tell. The following is a chronological account of (our) five best performances of the second half of Love International 2019.

Freshly wristbanded, the Beach Stage was the spot to catch main man Andrew Weatherall head up the Sunday night festivities. Not an easy decision – all of Gerd Janson and Vladimir Ivkovic b2b Ivan Smagghe were billed at the same time, not to mention the Futureboogie crew out on the infamous Argonaughty boat (fresh from hosting Dan Shake, Desert Sound Colony and Tristan Da Cunha earlier in the day). But back to Weatherall…

The Major took to the booth to flashes of lightning and the sound of pure analogue synthetica. What followed was an exploration of hard-hitting italo, deep electronic funk, conga madness and balearic piano beauties under the trickling Dalmatian night sky. You never know what to expect from Weatherall – it could be a thumping acid house set, deftly layered to shake the walls at certain frequencies, or a chugging slo-mo trek through his signature downtempo sonics. But who knows, really. This was a different kind of set, one more playful, slightly tongue-in-cheek and attuned to the ecstatic mood of its surroundings. A wildly eclectic adventure full of worldly sounds, motley and chaotic, re-organised with skill to levitate hands and magnetise souls.

As the first taste of LI, here is where we slowly turned on to that special atmosphere often talked about in hushed tones and sideward glances: folks were full of energy that you don’t normally see, involved with the music and with each other; genuinely happy, smiling, uplifted and bouncing. No matter that it was the fifth night in, no matter that the rainwater merged with perspiration, seeping through the moth-bitten canopy that half covered the stage. No matter that this was our first set of the festival, and for maybe lots of others their last: here was a crowd in flux, moving to the call as Lord Sabre dialled it up and rolled the frequencies back off to the people.

The Garden, Monday night. Serious thunder struck the sky and as we got to the Olive Grove, where Weatherall and Sean Johnston were delivering the opening minutes of their six hour A Love From Outer Space set.
Interstellar, extraterrestrial and dangerously slow, this was ALFOS as I hadn’t seen it before; a dedicated contingent of cosmic cats threw shapes in the squelch underfoot, roused by the electric blue mood.

The thunder quieted, the mob moved in. All of a sudden the floor was packed, and the ALFOS boys did what they do best: deliver an oasis of slowness in a world of increasing velocity. Between about 108 and 118bpm, Sean Johnston and the Guvnor explored the chugging outer limits of downbeat electronic sounds, from tribal smatterings to colourful Krautrock and Smiths edits from the future (pitched down, of course). Weatherall’s incense filled the air behind the booth and the cosmic ALFOS vessel went off to parts unknown.

On this occasion ALFOS had an extra touch of ethereality. Looking out into a sea of soaking wet revellers, six nights deep and giving back all the love that they were feeling, charged, euphoric and heaving in the energy coming out of the speakers (the Olive Grove boasts a particularly incredible system, even by the standards of the festival), the mood was spinning into newfound territories.

By 2am it was over and we left The Garden to make our way to one of Croatia’s most revered institutions, the setting of many a mythical clubbing tale: Barbs, anyone?

Welcome to Croatia’s most infamous nightclub: open-air, set among the pine trees and host to DJs and party crews from the festival until sunrise and beyond. The club itself is a short way from The Garden up some country roads, reachable by car, bus or speedboat and open every night for the dancers to carry on the party into the morning. Monday night and its up to Ruf Dug and the Futureboogie crew to throw out pulsating house, bubbling acid and deep techno cuts for an all-out crowd. As with ALFOS earlier in the night, people arriving at the club had to scramble for whatever shelter they could find; music played only out of the booth monitors. Then, as before, the rain dramatically stopped. The club’s legendary Funktion-One came to life, installed along a system of overhead racks that delimits the main dancefloor, and bodies filled the space.

Free to dance, free to talk, lie down, get on it or just get lost in the trebly crispness of that system. Lighting is minimal and constant: production is sacrificed for an extra level of aural depth that builds a real link between the clubbers, the music and the natural surroundings. Sunrise was beckoned in by a soulful gospel house incantation to a new day before a whirlwind of wonky disco, synthpop stylings and 80s jazz-funk re-edited for the floor as the morning rose above the 200+ strong crowd. Scenes to remember forever.

LI boat parties are the stuff of legend. 120 or so heads (tickets usually sell out in advance) surrounded by azure blue for miles, uninhabited islets dotted around the horizon and a hedonistic attitude that goes one knot further than even the wildest parties on the festival site. The Martina is a kind of tugboat with an upstairs deck, downstairs cabin and the Love International Recordings crew at the helm (another boat which goes out in tandem, Argonaughty, is docked just by). Stepping up onto the boat from the pier we’re given a bucket of ice and beers and left to gawp at the view as the disco boat filled up.

Reaching capacity both boats set sail and the dancing juice flowed out the PA. A two hour voyage to a secret island soundtracked by dancefloor dub, swirling percussion, sizzling cosmic disco and set to a backdrop of verdant shores and the calm blue Adriatic for miles. Dave Harvey and friends at the controls.

Our destination is a peninsula jutting out of the mainland where olive trees clump together to make a kind of rave forest, booth set up behind the shoreline rocks so the party can look out onto the sea. The two disco barges spill out onto a pier and into the trees where Axel Boman and Alison Swing dish out euphoric house and disco bangers for the people. Peak of the set: Axel Boman’s ABBA 002. This might have been the naughtiest couple of hours of the whole festival – everyone went to great effort to leave the island as they found it 😉

Back on The Martina the sun starts to drop and we cruise back towards Tisno in the haze of slow, balearic wanderings.

We’re out firmly in the waters and the party starts to get really crazy; a loose spirit takes charge and out over there a half-sun peeps out, the last rays of light at the horizon streaking the water a deep gold as Don Carlos’ Alina fills the balmy air. At the moment the drums kick in the sun is gone, banished until morning, and we’re left under the Dalmatian skies to drift into darkening sonic bliss.

Last night, last set. Leeds boys PBR Streetgang take to the controls at the Beach Stage after a roaring techno set from the squad behind Berlin’s Wilde Renate club.

Often, when people speak about Love International, they mention a feeling of kinship, a family vibe. Folks who see each other once a year for a week-long rave in the Croatian sun. As the last bodies emptied out of the boats and PBR took to the decks, it was the last ones standing who packed out the Beach Stage area for one last bacchanal under the stars. A gathering of friends, whether they knew each other or not. Cue PBR Streetgang’s signature blend of shimmering house, gun-shot disco, analogue bassline jams and massive, tidal breakdowns for the heads. Hands in the air everybody. See you next year.

Love International 2020 will take place from Wed 15th – Tues 21st July. Check their website for lineup and ticket information, and follow the socials at FB and Insta @loveintfestival.