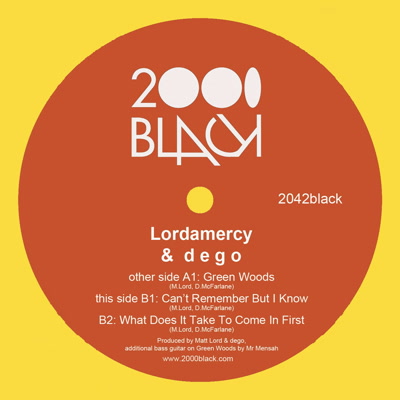 2000Black is an acclaimed London imprint that has built a reputation for putting out records that explore the electronic side of funk, soul and jazz. Lordamercy & Dego comprise part of the production team behind the label, and they’ve just put out one of September’s most impressive discs.
Green House is the first track up and the 45 Turns highlight. Sparse kicks, crisp claps and meandering keys provide the current for this jazzy, tropical-feel gem. What should be a mismatch of West African, Brazilian and UK broken beat influences comes together finely to make this a killer cut.


B2, What Does It Take To Come In First, is the other favourite. Its laid-back boogie attitude feels less outspoken than the rest of the 12″, partly because the rhythm section draws the track together coolly for a serious disco work-out. It sounds like an expertly trimmed edit but this is actually an original disco cut, and a sleek one at that.


Green Woods is released on the 8th Sept 17 on 2000Black. Get it from the source at 2000Black’s bandcamp page or from any tasteful dealer.