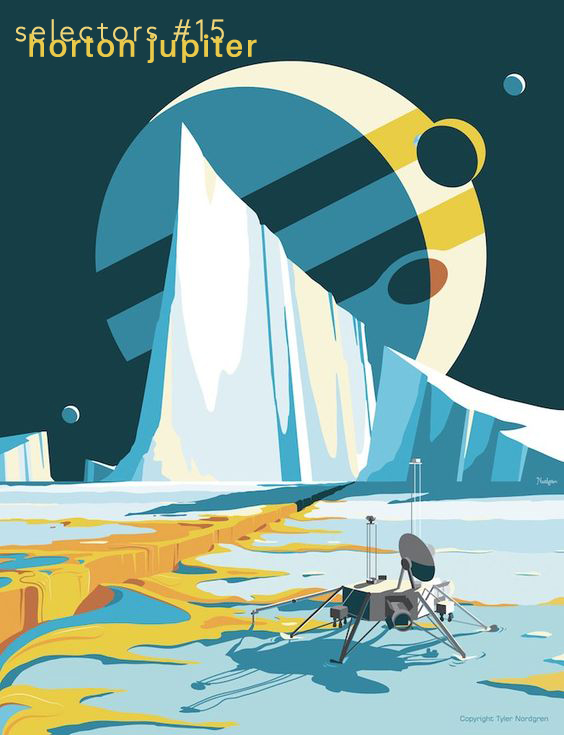 One in from London’s finest, a man who did the balearic ting back in the late 80s and has seen himself at the front of almost every incarnation of the east London underground party scene, ever present in some hypnotic way or other whether as resident as Club Kosmiche, Puwaba or PHONOMANCY, releasing on Bahnsteig XII or fronting Erisian pop outfit They Came From The Stars I Saw Them. Horton is a lively spirit, a burning character, a man with a certain magical touch when it comes to playing records and a raconteur of the finest degree. His 80 minute excursion for 45turns is something I’ve been keeping to myself for a while but it’s high time to release this mega trip onto the world…

You wake up on your back on a starry cruise down the Amazon river, facing up as colours and fauna amble between the thick growth of the riverbank trees. Next thing you know you’re going boom, hurling through the night sky and into the cosmos where a travelling troupé of beatnik aliens intercept you for a voyage back home to the fifth planet.

An eclectic, hypnotic Horton party, where outros linger in the air as volcanoes erupt from below them engulfing everything but them, channeling with frightening accuracy the most absurdly lucid just-roll-with-it moments of a psychoactive trip. A solar speed blast through mad percussions, rolling 909s and politically charged house music, finishing on a slippery psychedelic Brazilian number imbued with that heavy cartoonish Horton touch.

Selectors #15 by Horton Jupiter – lap it up, learn all about it.