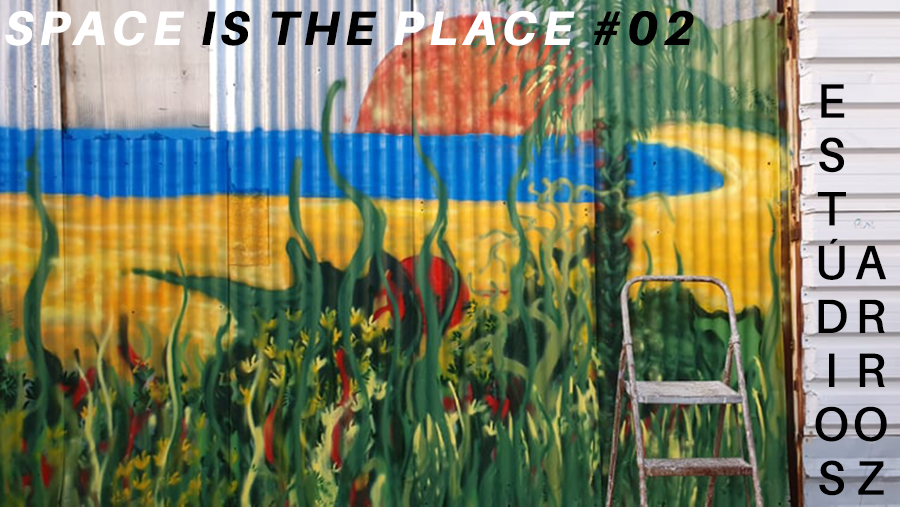 Welcome to SPACE IS THE PLACE, a new editorial series that looks at physical spaces we come across on our travels. A thread between distinct compass points, a roadmap for the balearic voyageur; this series is an exposé of a growing network of music lovers and bootstrappers that value celestial sounds, visual art and cool evenings on the terrace. This first part of the series focuses in on Lisbon District, Portugal.

Lots of folks in Lisbon had started the new decade at the helm of exciting cultural initiatives that aimed to use music, visual art, food, wine, records, radio, crafts and more to build connections and empower communities. This was all the more necessary at the beginning of a decade that already called for unity in the face of fragmentation.

While the 2020 pandemic has dominated information streams and left the cultural sector largely in the sidelines, these initiatives have been thrust into an uncertain present. This series aims to shed light on the people and places forging a path through this new landscape. The second instalment looks at Estudios Arroz, Beato.

Head east out of downtown Lisbon along the northern margin of the Tagus River. You might be surprised at how quickly the scenery shifts from the domes and spires of the Alfama that sit neatly beside the Pombaline façades of downtown (baixa). A little further on, the neoclassical exterior of Santa Apollonia train station gives way to greying, semi-dilapidated 1980s apartment buildings. Get past Lux Frágil, Portugal’s biggest club perched at the edge of the city centre, and you are on the fast road towards the eastern outskirts of Lisbon.

It’s a route that many have taken, willingly or not, as part of what Matéria Crua calls ‘the decentralisation of Lisbon’. The raised section of Avenida Infante Dom Henrique gives the voyageur more perspective, a sort of third eye that catches on the long queues outside a city office building repurposed as a food bank, or the homeless community set up in a motorway underpass, using boxes and refuse from the nearby cargo ship docking stations as storage and shelter.

Blink and you’ll miss it: it’s among this riverside landscape of concrete and metal that you’ll find Arroz Estúdios, your destination, the new demarcation point of Lisbon’s cultural centre.

We linked up with the studios through Matéria Crua. a multicultural organisation who want to ‘expand the cultural centre of the city by bringing our project to its outskirts, creating opportunities for cultural re-energisation and comprising social, economic and artistic initiatives’. Where the centre of Lisbon has been the victim of increasing rent prices, largely due to a boom in foreign investment in housing and tourist accommodation in the city, monthly salaries have not reciprocated the surge. It’s a familiar story with the consequence being that many are turfed out of the centre. This has a knock-on effect on outlying communities.

Matéria Crua respond to this problem by providing a nurturing environment for those for whom access to centrally-located initiatives is not obvious. They are similarly conscious of the effects that new initiatives such as theirs might have on the existing communities, and their purpose of ‘easing the cultural strain on local residents provoked by gentrification’ places them as an important mediator between tradition and the future in a rapidly changing city.

Their project is centred largely around Arroz Estúdios, a private association, industrial studio and events space in the Beato district on the east side of town. Flanked by derelict port yards on its river-facing side and the 18th century Palácio Xabregas on the other, the very location of Arroz is a stark visual rendition of the socioeconomic situation that many of Lisbon’s outer freguesias face. In places like Beato, where the effects of the debt crisis on traditional industry and businesses are still being felt, the steps taken to recover have, in some respects, compounded the challenges facing the community. The problem takes on another dimension when the port complex that comprises most of the riverbank in this area lies empty due to the current disruption in global trade. Without getting too much into it, Arroz Estúdios is caught between a diverse set of challenges which have become their raison d’être, and which symbolise, in many ways, the status that Lisbon and perhaps Portugal as a whole is beginning to occupy within Western Europe – the centre away from the centre.

The venue revolves around an open air events and meeting space for the 14 studios and two galleries that fazem parte of the Arroz project. These various buildings, from an industrial hangar to typical Portuguese co-working offices, are host to recording engineers. photographers. painters. vintage sound system technicians, a psych rock band and live electronics ensembles, to name but some. They are all part of a moving roster of local artists-in-residence hosted by the studio.

To complement this, Arroz opens its gates most evenings for events and workshops that bring the local and wider communities together. Since their opening last year the studio has played host to weekly open jams, live electronics sessions, open air movie screenings and hangar parties where local DJs have joined UK collectives such as Loose Lips and Ransom Note.

Each week the studios is the location of a lively Sunday affair, Domingos no Arroz. It’s hosted by Materia Crua and situates itself at the crossroads of art (exhibitions and workshops), music (record fairs and live DJs), health and wellbeing (yoga, anyone?) and food (handled by Arroz’s resident pizza patrons Coletivo Mergulho, serving up fiendishly good vegetarian pizzas for the people).

We had the pleasure of joining Materia Crua for one of their weekly events in July, delivering a 7-hour set with vegan dinner served by local chef Nuno Ferreira (aka DJ Smoked Falmon), with portions saved for the homeless, and an exhibition from artist Maria Kruglyak. It was a beautiful day out in the sun and a chance to showcase some of the records we’d been digging during a pretty dry few months for gigs.

From a personal perspective, working with Arroz made me really step back and think. This is one of the rare spaces in the city where you can go and be given the space to conceive your project without interference – and, like many of those involved n the studios, I somehow ended up there all the time. It’s a meeting space for the displaced, from the nomad pizza gang who had previously been camped up in Berlin and various other spots before deciding to stay at Arroz, to the musicians and artists who occupy the studios and galleries.

It’s a spot where you’ll want to stay all day, and you’ll feel like you can. Arroz offers you the space to see what you can do with it, taking a step back while you create and ideate. It’s an absence of prescribed ideas about what constitutes art or how things should be done – something that plagues cultural initiatives elsewhere – but with a brand ethos and aesthetic realised by a brilliant events team that makes for quality and consistency within a really diverse events calendar.

This kind of welcoming, nursing and socially-conscious attitude is what we need to see from cultural initiatives, and Arroz do it well. In the Portuguese tradition of private association, their space is less vulnerable to the kinds of external forces that housing and business in the city is – the result being that they find a way to organise projects that are by nature grassroots, which are open to those who need it.

The pandemic has obviously affected the day-to-day running of the studio, but they have reopened with social distancing rules and a cap on numbers. Don’t let that put you off, though – when in Lisbon, a visit to Arroz is a must. And if you’re there on a Sunday, even better. Materia Crua and the studios are doing a fine job of providing a much-needed space for Beato’s creative community, a feat commendable enough even without considering the current limitations on gatherings.

So, here it is, an abridged section from our 7-hour trip full of beats, bleeps, drums, dubs, astral sonics and international experimental balearic vibrations recorded on a gorgeous 30 degree day in Lisbon. Hope you dig it!

PS: We painted the wall balearic. Maria’s palm-fringed sunset sits proudly on the back garage wall of the hangar – go and check it out 🙂  (insta: @m.kruglyak)

A big thank you to Cintia from Materia Crua, Steven from Arroz, Chris Floris for the music and Maria Kruglyak for the visuals, as well as every one at the studios who were more than happy to help us out with this project.