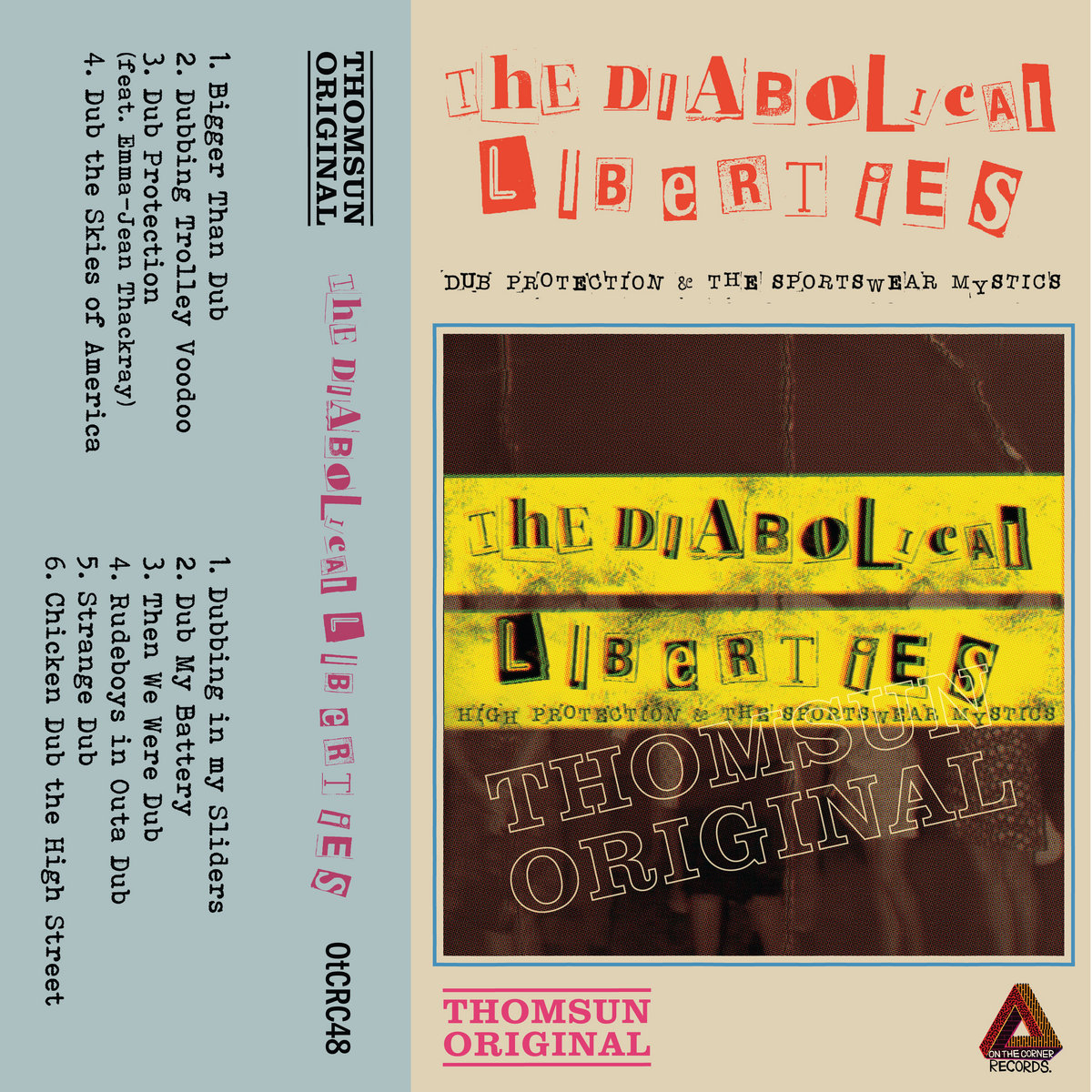 Dub Protection & The Sportswear Mystics ditches the vocals and goes for an all-in astral reach, excavating the bowels of The Diabolical Liberties’ debut LP on On The Corner Records and providing a suitably devilish reconstitution. It takes cues from black music cultures either side of the Atlantic, from early UK rave movements to the pantheon of jazz and disco in the Americas, while keeping that circuitous tension of the Jamaican dub version intact – like all the best dub mystics do.

‘Bigger Than Dub’ teases a play on The Revolutionaries’ Kunta Kinte Dub via spiraling melodica and brooding, resonant breaks. Bass guitar suggestive of early 80s post-punk – ESG comes to mind – dances alongside ferocious percs and flangy samples. Second track is ‘Dubbing Trolley Voodoo’, which feels a bit Detroit with its squashed drum hits and starry-yet-moody synth arpeggiations. It segues out into a gyrating, euphoric breakdown with the full-on drum roll and filtered chords action, coming out the other side into some sort of tropical fantasy land replete with warbling birds and languruous, shuffling rhythm work. Absolutely killer stuff.

Track three is ‘Dub Protection’ with Yorkshire’s acclaimed cosmic jazz bandleader Emma-Jean Thackray on (dubbed) vocals and a low-end so compressed you can smell the smoke coming from the machines. ‘Dub the Skies of America’ is the desert trip, a mellifluence of huge bass synth sounds and filthy guitars oscillating over smashed drums and lively, infectious percussions.

Tracks five and six are ‘Dubbing in my Sliders’ and ‘Dub my Battery’, the former a rework of the lead single from the original Diabolical Liberties LP and the latter reminiscent of Sabres of Paradise in its leftfield dub shuffle. Fast, punchy and suitably weird, ‘Dubbing in my Sliders’ takes on the Arthur Russel mantle with an iniquitous crossing of disco, free jazz and techno malfunction. Then comes ‘Dub My Battery’ – my album highlight – with its low-slung funk and stoned-as-fuck cowbell bashing, a rebel anthem for low-key gatherings.

‘Then We Were Dub’ is brilliant, uncanny and constantly wandering in different directions trying to catch its own shadow, a late-night sampling session turned into something more sinister, while ‘Rudeboys in Outta Dub’ has a kinda dark liquid DnB sound and steppin’ b-line for tough dancefloors. ‘Strange Dub’ does what it says on the tin, and reminds of rare Jamaican reggae versions with its momentous reverb and celestial squiggles. Rounding out the cassette is ‘Chicken Dub the High Street’, a psychotic cosmic jazzz number for headbanging and spliff swinging in the wee hours.

I’m always on the look out for stuff that joins the dots between post-punk, dub, disco, jazz and dance music, and every now and then a record appears that just hits the spot. If that’s also you, then don’t pass on Dub Protection & The Sportswear Mystics, which is, in totality, way more than just a dub version. It’s a love letter to the underground of much-loved music cultures, and particularly ones that flourish in unity and togetherness, things that we haven’t seen much of recently. Add to that an artwork that pays tribute to the 1980s Thomsun Original tapes from the UAE, and this is a classy package well worth its weight in dub.

Cassette only release from On The Corner Records – 6 copies left at the time of writing.