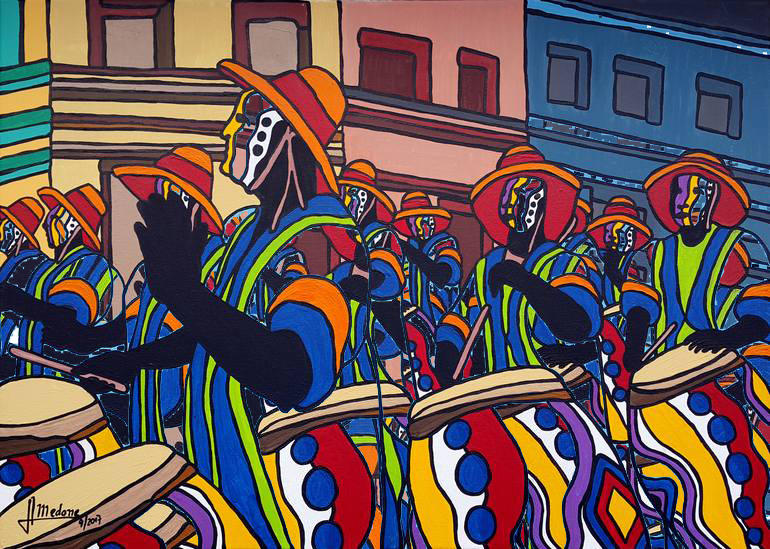 This through from friend and collaborator Romolo Disco aka Rodrigo. R recently spent a lot of time back home in Uruguay, picking up records and going through his collection of local sounds. Upon returning to Amsterdam he’s put together this very beautiful and expansive mix and gladly donated it to the site, which is meant to showcase the really huge cosmopolitanism of sounds, traditional and more contemporary, coming out of his homeland. Uruguay, perched on the Western Atlantic hanging over Argentina and at the foot of Brazil, is oft overlooked musically in favour of its somewhat more prominent, and much larger, neighbours. But Rodrigo’s mix shows how a mere two hour ferry ride over the Rio de la Plata from Buenos Aires brings with it a sound quite well-removed from other regional jazz and funk scenes, something which blows from the same trumpet as but perhaps predates the young jazz movement emerging here in the UK, and a sound which is quite definitely Uruguayan.

Rodrigo says:
‘The set has two sides. The first few tracks are slower and more breezy, I just wanted to show how Balearic some Uruguayan music can be. The second segment of the set is more about showing the actual Candombe, and it’s various fusions with jazz, especially in the ending part that goes deep into jazz-funk. I added a couple of pure candombe tracks with no keys or any other instrument, just the 3 types of candombe drums (chico, repique and piano). For instance from “Morenada” which was a very popular street candombe group, with tens of drummers playing together. ‘

45turns · The Sound of Uruguay, by Romolo Disco

A bit more about Candombe. This is very traditional Uruguayan percussive music with its roots in sub-Saharan Bantu traditions. As large numbers of African slaves arrived into Uruguay through the end of the 1700s and into the 1800s, we see a very lively amalgamation of African and European, folk religion and Christianity, which passes over into the musical realm as well as pervading most aspects of New World society in general*. Candombe – not to be confused with the predominantly Brazilian folk religious practice of Candomblé (not that clear cut, eh?) joins the likes of the Cuban son as a music prefiguring a new type of cultural mixing in the Atlantic world. Spanish colonial authorities tried in vain to stamp out the ferocious Candombe sound – often composed of three sets of thundering drums and taking place in spontaneous street demonstrations – as a perceived threat to public morality. In reality Candombe was a coping mechanism, a reinstatement of the diversity of Bantu and wider African beliefs through instrumentation – the drum, called tangö, gave its name to the place and the dance of Candombe. So the authorities called this the tangö of the blacks, and the Candombe moved further and further underground. Despite this clandestine history of persecution, however, Candombe lives on today. This is the echo of old Africa in Uruguay, and it has evolved alongside its environment to such an extent that the Candombe you hear today takes on other regional and global sounds – trad jazz, bebop, jazz-funk and so on. This is what you’ll hear in Rodrigo’s mix, alongside some less traditional but slightly breezier national music of Uruguay in the first hour.

Get lost in the hypnotic sound of Uruguay, courtesy of Romolo Disco – disfrútala!

*there’s loads to read about this, but my favourite introduction is Paul Gilroy’s The Black Atlantic.