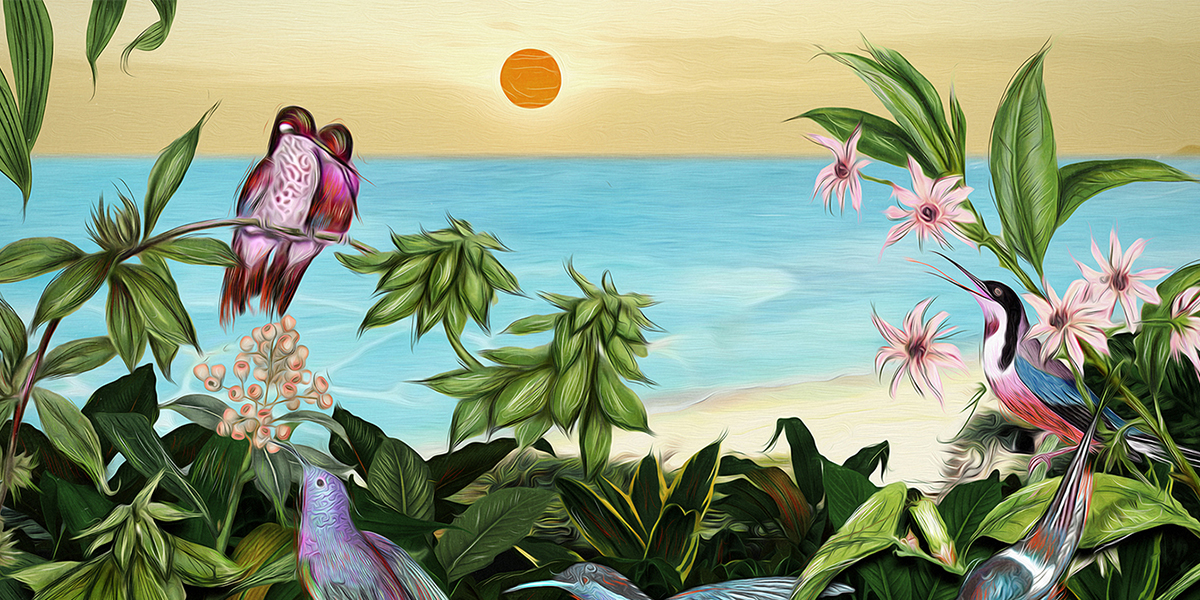 Balearic is a word that’s thrown around a lot in 2018. Balearic style, balearic beat, balearic house – it’s just balearic, innit? But is it? A quick look at the balearic category here on 45turns will turn back music from deep house to downtempo to Brasilian funk and ambient. Does that mean they’re necessarily balearic? To me, yes. But whether my definition of balearic is true to what was originally ‘balearic’ is a different matter. Was there an original balearic sound? Some might say. And is that sound balearic in 2018? Is this even something we should be thinking about?
Nah, man. Sit down, chill out and listen to this.

People are confused about balearic music in pretty much the same way they’re confused about a genre like deep house, for example. What is ‘deep’ about house in 2018? Well, you might go back and ask ‘what is original deep house?’ and find out about Larry Heard and the movements going on in 1980s Chicago that led to the creation of a track like ‘Can You Feel It‘. While there may have been examples of proto-deep house prior to this (Azymuth, anyone?), Mr. Fingers provided the definite signal of a new framework in electronic music with its own sounds, tempo and textures.
These days anything with some floaty pads and a four-to-the-floor beat is called deep house. The difference between this and something like balearic, though, is that you can usually tell when something really is not deep house. There’s a set of generic conventions that dictate whether something is house, deep house, garage house, dream house… the list goes on. The difference with balearic is that a song in any of these styles – or pop, reggae, rock, classical, ambient, soul, downtempo – could necessarily be considered balearic. Balearic music, or balearic beat, is a far more equivocal term, existing in a liminal space between sunrise and sunset. And more confusing than anything is that balearic music in 2018 might not even exist – because it might never have done in the first place.

A brief history of balearic beat

The music that was called balearic in the mid-80s was the record collections of a handful of open-minded DJs who used the isolated Mediterranean setting of the white isle to experiment with the records they played, taking their crowd in a different direction and towards a new appreciation of sound and music.
Ibiza, with its handy location in the middle of the balearic sea, was a hotspot for DJs and party people from all over Europe and the world. British, Italian and German jockeys all made their way to the hippie retreat of the white isle with cases of records in tow. Hence the stuff being heard was a melange of really eclectic styles, from German new wave and Italian pop to Mediterranean guitar and classical pastoral orchestras – not genearic, but balearic. Unlike conventional genres, balearic music never came custom-made: it wasn’t created on purpose, but was rather an attitude towards playing records cultivated by certain DJs – Alfredo and Leo Mas at Amnesia being the main culprit – and later Phil Mison and Jose Padilla at the Café del Mar.

The freedom that had always been associated with Ibiza meant that people would dance to whatever, and the fact that people would dance to whatever meant that clever DJs could really push the boat out in their selection, mixing and technical decisions. Cue all-night parties with blissed-out crowds, creating a sort of spiritual oneness with the music and the surroundings. Sunrise sessions playing 45s at 33rpm where all of a sudden the world slows down. An incomparable feeling that right here, right now, everything is right. A collective appreciation for something more sybaritic, brought on by sun, drink, drugs, dancing, chatting nonsense and no-one caring and, most of all, the sonic waves.

In the following years folk like Danny Rampling and Nancy Noise tried to bring this music, this style, or maybe more than anything, this attitude, to London, in clubs like Shoom in Southwark or The Future, behind Heaven. At this time it started to be known as balearic beat and publications like Boys Own popped up to cover this night time economy of freedom, expatriated from the white isle to the basements of dingy London clubs. All this late-night deviance was the breeding ground for the acid house and piano house action from 1988 – the ‘Summer of Love’, or known by some purists as ‘the year balearic died’. And music which came to be produced with the balearic moniker in mind was an attempt to channel the essence of both the original Ibiza parties and the London gatherings after them. Some of it is good, some of it is awful: a quick youtube search of ‘balearic music’ will bring back tons of rubbish that identifies itself as balearic, but this highly processed, built-to-brief sound doesn’t really represent the original spirit in a way that a late 70s German synth track from way before ‘balearic music’ was even thought of might. .

Even with that brief history, we haven’t come much closer to a solid definition of what balearic music is. If you wanted to break it down, there might be three distinct sounds to look for. Or maybe four. Ooh.. balearic house in itself could be three or four different sounds. In fact, maybe the best way to do it is to describe a perfect balearic day out, somewhere in the sun. Here goes…

9am – wake up very slowly, make a coffee and head onto the balcony. The sun is halfway up its daily ascent and you’ve got a vista of the sea, or perhaps some mountains. The remains of last night’s balearic session are strewn across the table. Play: the classical Mediterranean crossover stylings of Penguin Café Orchestra.

12pm – have a banana, because there’s nothing more balearic than that. After your balearic banana, enjoy a midday beer with the spaced-out sounds of Idjut Boys as you squint in the midday sun.

3pm – cocktails, swimming, a quick game of football, a phone call to a friend – anything you like. But, most importantly, some Japanese balearic sounds to see you through the afternoon.

7pm – blurry sunset over the horizon. Good friends around. Old friends, new friends and a feeling of extreme contentedness with the world and everything in it. On the speakers? Ray Mang’s ‘Look Into My Eyes’:

9pm – a quick change of clothes, if you feel that way out, before heading off into the night and all its vices. Booze, lust, anticipation, Code 61: ‘Drop The Deal’.

You hear the bass at 45 seconds in and triumphantly declare: ‘that’s balearic!’
11pm  you’re on the way to somewhere, but you’re not quite sure where, or why, and you’re a bit pissed. All you know is that you’re going there and it’s balearic. Get there. They’re playing Mushrooms Project:

1:30am – It’s the middle of the night, you’ve made loads of new friends and you’ve already forgotten most of them. The DJ is a maverick and decides to turn things south. Cue the rolling Balearic synth lines of Rozlyne Clarke’s ‘Dancin’ Is Like Making Love’ (Dub 2).

3am – who better than Italo house pioneer Don Carlos to take the dancers by the hand, guiding you into wide-eyed euphoria? When the keys of ‘Play It Again’ come in, it feels like the stars above are spinning a magic tapestry just for you:

5am – the crowd has thinned out, leaving a devoted core of balearic warriors to dance away the last remaining hours of night. Moments are being created left right and centre, but when the Cool & Breezy Mix of Mandy Smith’s ‘I Just Can’t Wait’ is played, everyone thinks that they finally know what balearic is.

7:30am – the first warm rays of the morning sun slip out over the horizon, and you’ve moved onto the beach with a motley crew of drinkers, dancers and DJs. By the time the double-time frenzy of the last section of Elkin & Nelson’s ‘Jibaro’ is over, the sun sits firmly in the morning sky and you want to do it all over again. So you do.

Is there a common thread that runs through all of this music? In my mind, its the waves. The image of the waves is something that I believe is central to what we call balearic music and its sound, its roots, its ethos and its persistence. Rolling synths, lapping drums and build ups that never come, guitar lines that could go on forever, a beat that never ends. Balearic music, like the waves, is in constant flux, ebbing and flowing with the world around it, always reinvigorating itself, always fresh. Balearic is brilliant, off-the-grid, life affirming, spiritual, restless, downtempo, uptempo, tribal, disco, folky, eclectic, endless and free. It can be anything you want it to be, as long as its balearic, and maybe that’s the best way to look at it.